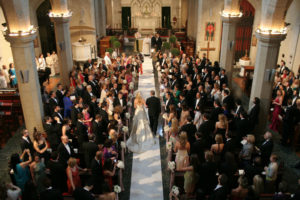 Air on a G String/ J.S. Bach for Wedding Ceremony

As mentioned a recent post, I was going to talk about tempo of music, which refers to the speed of the beat.   This particular masterpiece was written as an orchestral suite in the 18th Century by J.S. Bach originally composed for three trumpets, timpani, two oboes, strings (two violin parts and a viola part), and bass.   But it has since been played by other instruments, not to it’s detriment.

Regarding tempo, the Air on a G String is intended to be played slowly, and gives the feeling of being in a dream.  Very moving. Awesomely romantic too.  There are just no words for how great, uplifting, and inspiring, and beautiful this piece is.

I attended a friend’s wedding where this piece was featured as the processional, played by a small group of strings, and it was so amazing.  By the time she got to the alter, the music from the 1st section was just done.

Anyway I have recorded a few versions of the 1st section of this piece.  Here’s one for organ (which is actually being played by my keyboard using a sampler of sounds from an actual organ).    I feel that this is a very good choice for processional and your guests will be blown away!

Scroll back to top